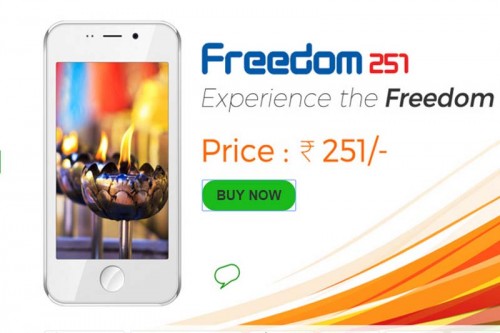 There are reports that DeitY (Department of Electronics & Information Technology) had called the management of Ringing Bells for more clarification on the Freedom 251 smartphone, which company is selling for Rs.251. Ringing Bells claim that they are selling the world’s cheapest 3G Smartphone which is sold for Rs.251. Company had already took booking for that phone online on their official website www.freedom251.com. The company got total of 6 crore people booked this mobile. Two days back Company had stopped taking anymore orders.

There were lots of unanswered question about the Company and the Freedom 251 Smartphone. How Ringing Bells can sell a Smartphone for just Rs.251, where a 1GB 2G/3G data cost more than that. The company still claims that even after selling the mobile at Rs.251, its still making a profit of Rs.31 on each mobile.

According to a report by the The Economic Times, Communications and IT Minister Ravi Shankar Prasad had asked IT Secretary Aruna Sharma to check the credentials and claims of the company, Ringing Bells, after it made the offer. The ministry has asked Sharma to seek help from state chief secretaries wherever needed as well.

There were reports that Company not even have BIS Certificate. Last week we had seen a Income Tax officials visiting the Ringing Bell Office in Noida. But the Company claims that they are in the process of applying for BIS Certificate on their products.

The Company had already sold few products in on their official website ringingbells.co.in, The products include one 4G LTE Smartphone,2 feature phone and a power bank. Many people had already ordered and paid for those products are still waiting for the delivery. The company had announced that the delivery will be done by Feb 25th, but till now there are no communication from the company on shipping details of the product. More over we are not sure about does these products which they are supposed to deliver on Feb 25th have a BIS Certificate or not.

Booking Closed for Freedom 251 on freedom251.com