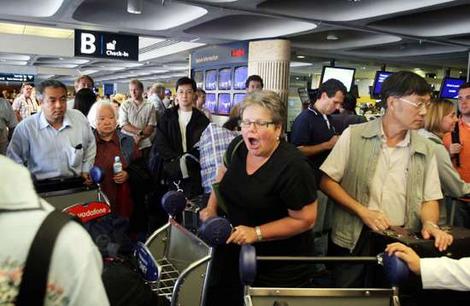 A one sided fight ensues between an airport authority and a passenger.

Finally, the formalities concluded and he boarded his flight. A curious onlooker who was an anger management trainer rushed to the authority and quickly introduced himself and said he's beyond amazed by his behaviour and that he's never seen anything quite like that before.

Trainer: How could you possibly control your anger when that guy almost pounced on you?

Authority: As an average human, I was very angry. Even I can't control.

Trainer: But, I couldn't notice anything.

Authority: He didn't either. (smiles)

Trainer: I don't get it. What do you mean?

Authority: Simple, he's headed to Japan. His luggage is headed to America. (grins)