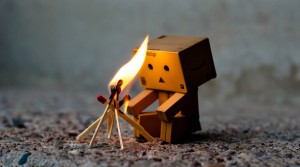 Danbo is a Japanese cardboard robot that originally appeared in the manga Yotsuba! in 2007.

first issued in April 2006. Yotsuba Koiwai’s friend Miura Hayasaka created the costume out of cardboard boxes as a science project, but 5-year-old Yotsuba is convinced it’s a real robot.

Danbo is seen as an icon of curious innocence.

Since then, photographers everywhere were inspired to make something really fun and even artistic with the Danbo.

As early as 2009, Flickr users began posting series of photos featuring Danbo in every day situations in the style of Photo-a-Day projects.