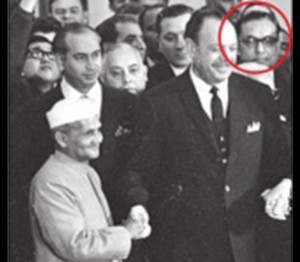 This picture of the Prime Minister Lal Bahadur Shastri in 1966 during the Tashkent visit.

A person's face standing behind Sastriji in this picture has been found substantially similar to Bose.

Based on the Face mapping reports of British forensic expert Neil Miller claimed that the man in the picture with the scribes stood, he would Netaji.

The face-mapping report lends credence to a claim made by Shastri's kin that he may have spoken to Netaji during his Tashkent visit. Shastri mysteriously died of a heart attack in Tashkent on January 11, 1966. The former PM's grandson, Sanjay Nath Singh, who was nine then, recounted that during a phone conversation barely an hour before he was declared dead, Shastri had said he would disclose something on return that would make the Opposition forget everything else.

Tashkent is know as "Stone City" is the capital and largest city of Uzbekistan.