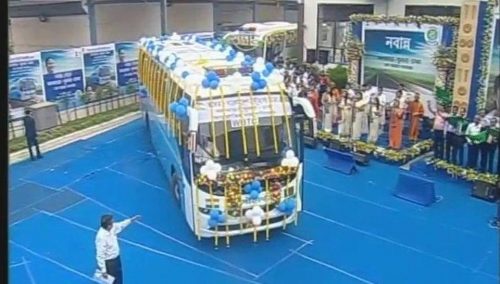 A Kolkata-Khulna-Dhaka bus service was ceremoniously flagged off from Kolkata yesterday. Prime Minister Shri Narendra Modi, his counterpart from Bangladesh Smt. Sheikh Hasina and the Chief Minister of West Bengal Smt Mamata Banerjee jointly initiated the ceremony from Hyderabad House in New Delhi. This is a part of several initiatives being taken to strengthen bilateral relations and provide better road and rail connectivity for citizens of both the countries. Senior Ministers and high level officials from the Government of West Bengal and visiting delegates from Bangladesh participated in the flagging off ceremony held at Kolkata yesterday.

The bus services are being operated on the Kolkata-Dhaka and Kolkata- Dhaka-Agaratala routes in addition to the newly introduced Kolkata-Khulna-Dhaka bus service. They are being run by the State Transport Corporations of West Bengal and Tripura, besides Bangladesh Road Transport Corporation. Now, for the first time, Kolkata and Khulna are being directly connected through a bus route. In the 409 Km long bus route from Kolkata via Khulna to Dhaka, two buses will run three days a week from both sides.