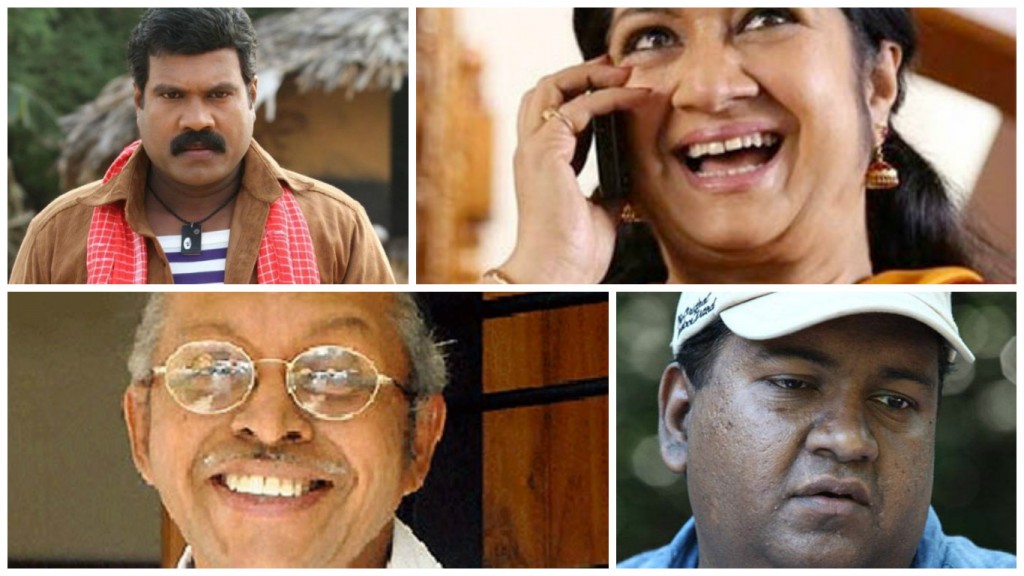 This year, 2016 started with a big loses for Malayalam Film Industry. Malayalam Movies lost many great artists this year.

Kalabhavan Mani Passed away on 6th March, 2016 (at 7:15 PM) in a Private hospital in Cochin. For last 2 days he was admitted in a private hospital in Cochin due to liver related problems. The actor was undergoing treatment for liver and kidney related diseases. He died at age of 45. Today afternoon there were unconfirmed reports that he was in a serious condition and on a ventilator.

Mani Raman (1 January 1971 – 6 March 2016), commonly referred to by his stage name Kalabhavan Mani, was an Indian film actor and singer. Mani started his career as a mimicry artist with the Kalabhavan troupe. He has starred in over 200 films, including Malayalam, Tamil, and Telugu films, and is especially known for his character and villain roles. He won the National Film Award and Kerala State Film Award in 1999 for his performance as Ramu in Vasanthiyum Lakshmiyum Pinne Njaanum.

Director Mohan Roop was found dead at Thrissur Mission Quarters on Tuesday morning. He was 53. His main film is Vettah starring Mohanlal, Mammootty and Sreenivasan.

The credit for making a film with the three legends of mollywood Mammooty, Mohanlal and Srinivasan, together for the first time, goes to film maker Mohan Roop, in his ‘Vettah’. It was his maiden film, at the age of 21. Mohan Roop, who takes courage to make films with new faces, is a priceless gift to the industry itself.

It was his maiden film, at the age of 21. Mohan Roop, who takes courage to make films with new faces, is a priceless gift to the industry itself.

Pillai’s sudden death at age 41 on 27 February a day after the release of his last film Vettah, sent shock waves across the film industry.

Rajamani, son of veteran music director BA Chidambaranath he won the state award for the background music of the movie Aram Thampuran. His contribution in music also extends in the Tamil, Kannada, and Urdu Cinemas He is also a recipient of three international awards for his background score in the movie The Laughing Buddha.

U.R Anandakuttan is one of the best Cinemtographers of Malayalam Cinema. Anandakuttan was born to Ramakrishnan Nair and Karthiyayani Amma on March 1954. He is settled in Ernakulam. His wife is Geetha and have three daughters. After completing Pre-dgree he went to madras for studying cinematography. His first film as a Cinemtographer was P Chandrakumar’s “Manasiloru Mayil” in 1977. He has worked in more than 150 films including His Highness Abdulla, Bhratham, Sadayam.

Ottaplakkal Neelakandan Velu Kurup (27 May 1931 – 13 February 2016), popularly known as O. N. V. Kurup or simply and endearingly O. N. V., was a renowned Malayalam poet and lyricist from Kerala, India, who won the Jnanpith Award, the highest literary award in India for the year 2007. He received the awards Padma Shri in 1998 and Padma Vibhushan in 2011, the fourth and second highest civilian honours from the Government of India. In 2007 he was awarded an Honorary Doctorate by University of Kerala, Trivandrum. O. N. V. is known for his leftist leaning. He was the Left Democratic Front (LDF) candidate in the Thiruvananthapuram constituency for the Lok Sabha elections in 1989. He died on 13 February 2016.

Shan Johnson (29), singer and daughter of famous Malayalam music composer Johnson who passed away in August 2011, was found dead in her Chennai apartment on February 5.

Shan Johnson died in her rented flat in Chennai on 5 Feb, 2016, after suffering a massive heart attack. Her body was also taken to Thrissur, and was buried beside her father and brother

Kalpana went to Hyderabad for the shooting of a Telugu movie. On 25 January 2016, she was found unconscious in her hotel room by a roomboy who knocked the door around several times but didn’t open. He forcefully opened the door and found her unconscious. She was immediately taken to the hospital by the crew members but died on the way. Doctors confirmed that she died of heart attack . Postmortem was conducted and her body was flown to her native place on 26th of January 2016. The funeral took place on the same day.