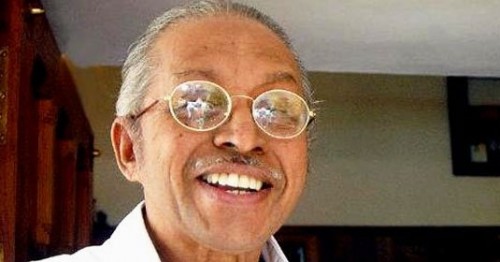 Renowned Malayalam poet-lyricist and Jnanpith Award winner O.N.V. Kurup passed away at a private hospital in Thiruvananthapuram on Saturday following a cardiac arrest. He was 84.

ONV, as he was popularly known, was part of the progressive movement in Kerala and penned some of the most remembered poems and film lyrics.

Ottaplakkal Neelakandan Velu Kurup (27 May 1931 – 13 February 2016), popularly known as O. N. V. Kurup or simply O. N. V., was a renowned Malayalam poet and lyricist from Kerala, India, who won Jnanpith Award, the highest literary award in India for the year 2007. O. N. V. Kurup is also a lyricist in Malayalam cinema. He has penned a lot of lyrics for dramas and TV serials also. He received the awards Padma Shri in 1998 and Padma Vibhushan in 2011, the fourth and second highest civilian honours from the Government of India. In 2007 he was bestowed an Honorary Doctorate by University of Kerala, Trivandrum. O. N. V. is known for his leftist leaning. He was the Left Democratic Front (LDF) candidate in the Thiruvananthapuram constituency for the Lok Sabha elections in 1989. He died on February 13, 2016 due to age-related ailments.

Executive Member, Executive Board of the Sahitya Akademi, New Delhi from 1982–86.
Chairman, Kerala Kalamandalam – the State Akademi of Classical performing Arts(1996).
Fellow of the Kerala Sahitya Academy in 1999.

He also has been the part of various delegation at international events. Some of the notable among them being:

Visited USSR as member of an Indian Writers Delegation to participate in the 150th birth anniversary of Leo Tolstoy.
Represented India in the Struga Poetry Evenings, Yugoslavia (1987)
Attended CISAC Asian Conference in Singapore(1990).
Visited USA to participate in FOKANA Conference(1993).
Visited USA to inaugurate literary seminar in Kerala Centre, New York (1995).
Presented poems on Beethoven and Mozart in the Department of German, University of Bonn.
Indian delegate to the CISAC World Conference held in Berlin (1998).